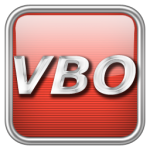 When OpenGL was first conceived there was no concept of storing data directly on the hardware that performed the graphics rendering. Initially, everything was rendered using immediate mode rendering (for an explanation on different methods for rendering primitives, refer to my previous article titled Rendering Primitives). Vertex arrays were introduced into the core specification in OpenGL 1.1 in 1992. Although vertex arrays were far more efficient than immediate mode rendering, they still required the client application to pass geometry information to the renderer ever frame. In 2003 the OpenGL 1.5 specification was introduced which added the ARB_vertex_buffer_object extension into the core specification. Vertex Buffer Objects (VBO) allow you to store the geometry information directly on the GPU. This is far more efficient than passing the data to the GPU every frame. In this article, I will show how you can use VBOs in your own applications to improve rendering performance.

It is also interesting to note that if you plan on using the forward-compatible contexts introduced in OpenGL 3.0, then VBOs are the only way to send geometry to the GPU.

Before we can use VBO’s in our own programs then we must ensure the current OpenGL context has support for them. I will use GLEW for extension support. For an in-depth discussion on extensions, refer to my previous article titled OpenGL Extensions.

The first step is to initialize GLEW in our application. This can only be done after the OpenGL context has been created as GLEW will not automatically create a context for us, it will only use the currently active OpenGL context. If you are using GLUT or freeGLUT, this only happens after a render window has been created using the glutCreateWindow function.

After GLEW has been successfully initialized, we can use it to check for support of the VBO extension.

If neither OpenGL 1.5 nor the ARB_vertex_buffer_object extension are supported then we can’t use VBOs to render our geometry, so we just exit the application with some random error code. If either of these statements returns true then we can use the VBO extension in our application.

To create VBO’s we first need to define the data that will be used to populate our buffers. In this demo, I will render a simple cube object. Each vertex of the cube will be rendered with a different color. As a result, we should see a nice smooth-shaded cube rotating on our screen.

For our geometry, we’ll use interleaved arrays with the following vertex definition:

The float3 type is simply a 3-component floating-point struct type.

We’ll define the geometry that will be used to render the cube:

The vertex buffer defines the position of each vertex in object space as well color for each unique vertex. This is an interleaved buffer but it is entirely possible to define a different buffer for the vertex positions and each vertex attribute (like color, normal, texture coordinates). It is generally a good idea to use as few buffers as possible as binding each buffer can have a slight performance impact.

This vertex array only defines the 8 unique vertices for the cube but in order to render a cube object in OpenGL, we need to define the triangles that make up the faces of the cube. For that, we’ll use an index buffer which defines the order in which the vertices should be rendered.

With our unique VBO ID’s, we can then fill the buffer data with the vertex array and index array using the glBufferDataARB function.

The ARB_vertex_buffer_object extension defines the following targets to bind buffers to using the glBindBufferARB method:

The glBufferDataARB method is used to copy the vertex data from system memory to the high-performance GPU memory.

This method has the following signature:

We need to bind the VBO’s to the GL_ARRAY_BUFFER_ARB before we can define the pointer to the buffer data.

On line 826, the vertices VBO is bound to the GL_ARRAY_BUFFER_ARB target.

We’ll use the MEMBER_OFFSET macro to get the offset in bytes to a specific member of a struct. This macro has the following definition:

On line 828, we do the same, but this time for the color attribute.

If we were using packed arrays instead of interleaved arrays, we would need to bind each individual vertex buffer object to the GL_ARRAY_BUFFER_ARB target before using the gl*Pointer function to define the offset in the bound buffer.

We also need to bind the index buffer to the GL_ELEMENT_ARRAY_BUFFER_ARB target before we can draw the elements using the glDrawElements method.

The BUFFER_OFFSET macro has the following definition:

This macro just casts the integer buffer offset value to a pointer type that is accepted by the glDrawElements method.

When we’re done drawing, don’t forget to set the OpenGL states back to normal.

If everything is correct, we should see something similar to what is shown below. You can use your mouse to rotate the cube (unless you see the YouTube video which happens if your browser doesn’t support WebGL).

At some point, you may want to modify the contents of the VBO. This is required if you want to create a particle effect or perform CPU skinning on animated characters.

If you are updating the entire VBO, the best way to update the VBO is just to call glBufferDataARB again, just as if you were populating the data the first time. Using this method requires that you keep a copy of your vertex data in system memory so that you can change the vertex data on the CPU then upload it again to the VBO.

You can also map the VBO data to a pointer in system memory, modify the data and unmap the buffer again. To do this, we’ll use the glMapBufferARB method to retrieve a pointer to the VBO data.

The glMapBufferARB has the following signature:

Acquiring a mapped pointer to a VBO could possibly cause a stall to occur if the rendering thread is still using the VBO to render the geometry causing your program to perform worse than expected. To avoid a thread stall, you can discard the current contents of the VBO by using the glBufferDataARB and passing NULL for the data parameter. This let’s the driver know that you don’t care about the contents of the VBO and basically discards the VBO contents and allocates space on the GPU for new data. Then when you map the VBO, the thread won’t stall. Obviously, you only want to do this if you intend to write new data to the vbo only. If you need to read the contents of the VBO, obviously you don’t want to discard the VBO contents.

You might be wondering why you just don’t use glBufferDataARB to overwrite the contents of the VBO instead of mapping a pointer to it? Mapping a pointer to the vertex buffer object to modify the contents is useful if system memory is scarce and you don’t want to keep duplicate data after you’ve uploaded the data to the GPU. Usually you can discard the system memory after the data has been uploaded to the GPU but then you must map the buffer before you can make changes to it.

After you are finished modifying the contents of the VBO, you should not forget to unmap it again using the glUnmapBufferARB method. This method accepts as it’s only argument the target buffer that was mapped with glMapBufferARB. You will most likely generate an error if you try to render the contents of a mapped buffer.

When we are finished with the VBOs, we should not forget to delete them. Buffer objects can be deleted with the glDeleteBuffersARB method.

In this article, I’ve shown how you can use the ARB_vertex_buffer_object extension to facilitate efficient rendering of your geometry.

I’ve shown how you can check for the ARB_vertex_buffer_object extension support so that you know for sure you can use the features described in the extension specification.

I showed you how to create vertex buffer objects and populate the VBO with data. I’ve also shown how you can use the VBO to render the geometry to the screen.

I’ve also described how to manipulate the contents of the VBO using the glMapBufferARB methods.

I’ve also showed the glDeleteBuffersARB method which is used to release the resources used by the VBO.