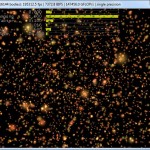 I assume the reader has a good understanding of the CUDA programming API.

There are several possible approaches we can take to solving this problem. We can use a brute-force, all-pairs N-body simulation where every body computes the gravitational force between all other bodies in the simulation. This implementation has an \(O(n^2)\) complexity, that is, the time it takes to solve the simulation for one unit of time (a time-step) grows exponentially when the number of bodies that need to be simulated grows. For a serial implementation this type of implementation may be prohibitively slow. However, this might be quite reasonable depending on the number of bodies that we can process in parallel.

In this article I will introduce a technique that can be used to solve this problem using a brute-force, all-pairs computation implemented in the NVIDIA CUDA programming API.

We will use Newton’s law of universal gravitation to compute the force that is applied between any two bodies. Newton’s law of universal gravitation states that every point mass in the universe attracts every other point mass with a force that is directly proportional to the product of their masses and inversely proportional to the square of the distance between them. This formal definition can be stated analytically as:

We can use this vector to compute a force vector that represent the force that attracts \(body_i\) to \(body_j\).

The first part of this formula is recognized as Newton’s law of gravity, the second component is simply the normalized direction vector from \(p_i\) to \(p_j\). The result is a 3-dimensional force vector that can be used to move the bodies together.

You will notice that this formula only sums forces for unique bodies (where \(i\ne{j}\)). This is a necessity because if two bodies were the same (that is, \(i=j\)) then the distance between them is zero and the denominator becomes zero and as we know from our years of math experience, we can’t divide anything by zero because this results in some undefined result. The acute minded individual might also consider that this situation could occur in our simulation if we don’t prevent two individual bodies from intersecting. 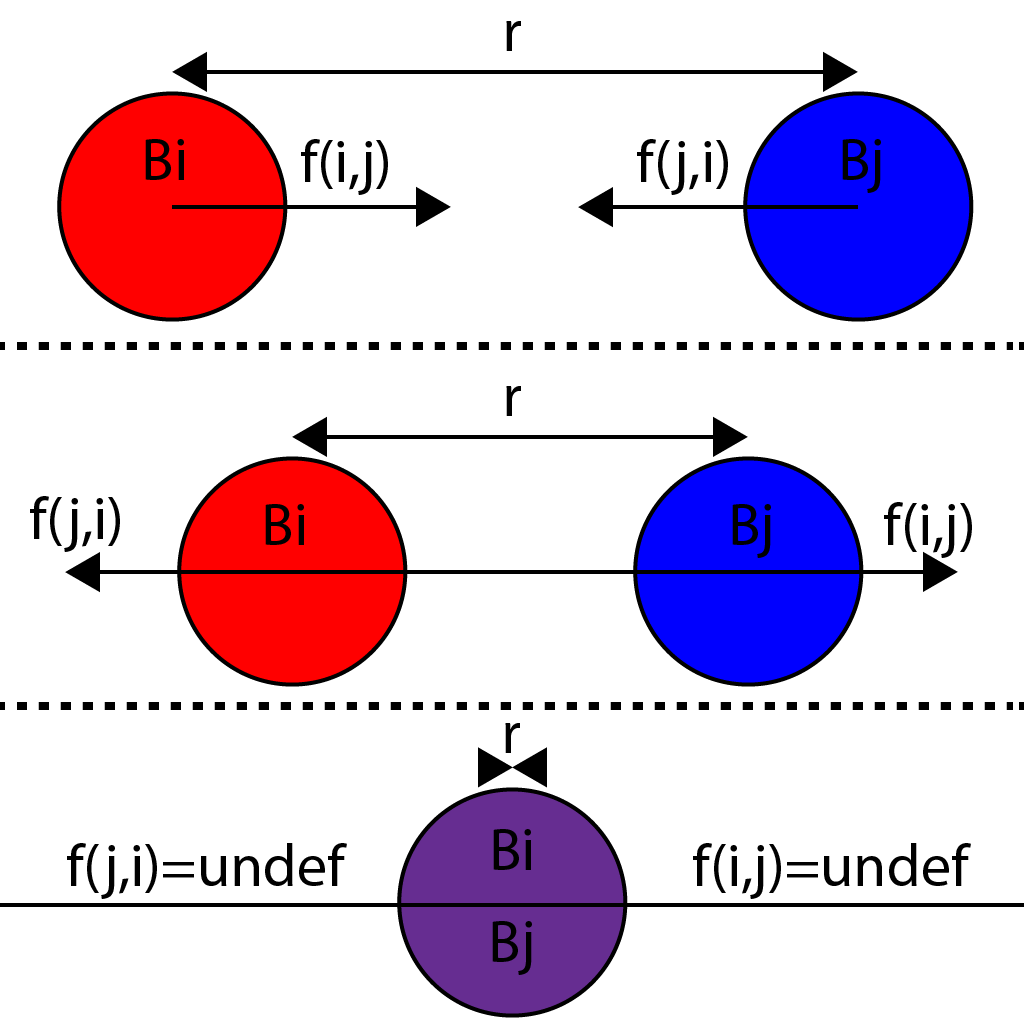 The image shows two bodies moving together. As they get closer, the forces pulling them together grows exponentially until the forces become infinite when the two bodies occupy the same space (black hole effect?). However, we don’t want to try to simulate a black hole with this application so ideally, we’d like to prevent the forces from becoming infinite. In order to avoid this scenario, we must introduce a softening factor (\(\epsilon^2 > 0\)) into the denominator and the equation is rewritten as such:

The softening factor in the denominator limits the magnitude of the forces between the bodies which is desirable when performing numerical integration of the point masses.

To perform the integration step (updating the positions of the bodies in space for a single time-step), we need the acceleration to apply to each body. We can rewrite the equation to solve for acceleration directly using the following formula:

If you remember from the article on the CUDA Execution Model a CUDA grid consists of one ore more thread blocks that are further divided into one or more threads. Threads within a thread-block can be arranged into 1-, 2-, or 3-dimensions and a grid of thread-blocks can be arranged into 1-, or 2-dimensions (3-dimensions on devices that support compute capability 2.0). For this implementation we will use a grid of 1-Dimensional thread blocks where each thread will process a single body in the simulation.

The image below shows how we might visualize this process. 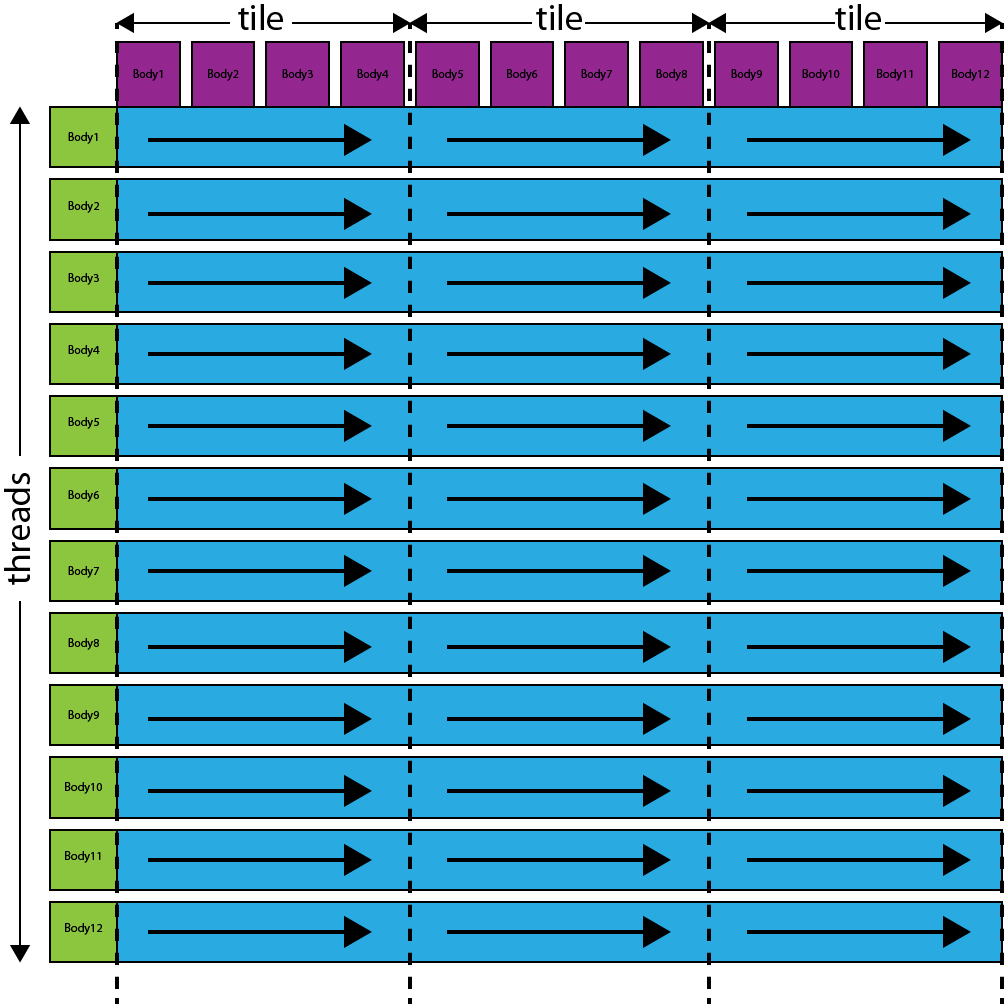 Let’s see how we might implement this in the CUDA kernel. Below we see the entry point for the kernel function that is invoked on the host:

The shPosition shared memory buffer declared on line 4 is used to reduce access to global memory.

On line 14, the position of the current body is “cached” in a register variable (myPosition) for faster access.

The for-loop on line 16 is used to perform the tile calculation (shown in blue in the “N-Body threads” image above).

On line 30, the thread block is synchronized again which guarantees that all threads are finished using the shared memory buffer before it is overwritten by the next tile.

After all of the tiles have been processed, the final accumulated acceleration is then written to the globalA acceleration global memory buffer. This value will be used to update the positions of the bodies in another kernel function.

We could integrate the accelerations into the bodies directly if we had another buffer to store the new positions (one buffer for the current positions, and another for the updated positions). We can’t integrate the body positions into the same buffer we are reading from because some threads will be computed after this one and we need to guarantee the bodies will not be modified until all threads have processed all bodies. So using a single buffer for the positions requires that we integrate the accelerations in a separate kernel function only after this kernel function has processed all bodies.

Let’s take look at what the tile_calculation function would look like.

This simple function takes the position of the current body (myPosition) and the current acceleration accel as it’s parameters.

The for-loop on line 45 loops through all of the body positions in the tile, accumulating the accelerations that will be applied on the body represented by the myPosition argument.

On line 50, the accumulated acceleration is returned to the calling function.

The bodyBodyInteraction device function will compute the acceleration (\(a_i\)) of one body (\(body_i\)) based on another body (\(body_j\)) using the formula discussed earlier.

The denominator of the formula is computed on lines 63-67. The value EPS2 is the constant softening factor that is used to prevent divide-by-zero errors in the case where \(\mathbf{r}_{ij}=0\).

The bj.w component is used to store the mass of \(body_j\). It is used as the numerator for the gravitational formula.

For a full analysis of this algorithm, I would refer you to Chapter 31. “Fast N-Body Simulation with CUDA” in the GPU Gems 3 book.