In this tutorial, you will be introduced to game physics. This is an incredibly broad field, and quite complex too, so you’ll really only get a teaser. This will however produce some pretty neat effects.

For this tutorial, we’ll be using the same template from the 2nd tutorial:

Many recent games use highly advanced physics engines. A physics engine is a piece of software that gets linked to a game. It takes care of natural behaviour of objects in the game, taking into account forces, collisions, momentum, rotation and torque. Writing a good physics engine is hard for a number of reasons:

For this tutorial, we will therefore focus on a simplified physics model, called Verlet Integration.

It works like this. If you have an object that moves along a straight line at a fixed speed, for each frame of your game, you can calculate its position like this:

That’s one way. Another way just looks at subsequent frames, and calculates the position incrementally:

If the time it takes to render one frame is roughly the same each time, you can simplify this one step further:

In other words: If we moved an object from \(p_0\) to \(p\) during the previous frame and both \(\Delta{t}\) and \(v\) remain the same, then we will move the same distance for the current frame. The distance between two snapshots now effectively becomes the object’s velocity.

Now imagine that there is a force that is pulling on our object (e.g. gravity). To apply that force, we adjust the position (by adding \(\Delta{p}\)) and then we move the object some more, to account for this force. If the object was already moving down, it will now move down faster, because in the next frame, \(\Delta{p}\) includes the applied gravity.

Let’s put this into some code. Replace game.cpp with:

First, I need a piece of code to draw a circle. That’s because circles (and spheres, in 3D) are excellent for physics. You’ll soon enough find out why.

No need to scrutinise that code, for now it’s fine to simply use it.

As you can see, the ball starts falling, and its velocity is increasing. It does fall through the floor though… And let’s not forget the other sphere.

So, we now have subsequent positions (the difference of which is the velocity), and forces (implemented by changing positions directly on line 37). We need one more thing: constraints. In nature, a ball cannot fall through another ball, or through the floor. Using Verlet integration, we handle this using constraints.

Here’s one example: Since a ball cannot fall through the floor, we need to test for that. As soon as we detect that a ball does intersect the floor, we correct the situation, by moving the ball out of the floor. Note that this effectively changes the speed of the ball, if we keep interpreting the difference between subsequent positions as speed!

Apart from avoiding collisions using constraints, we can also keep objects together, using simple springs. This time, the constraint is: Two objects may not be further apart than a certain distance. When they are, we move both objects closer together to simulate the spring.

So, let’s add a first constraint. Here’s the code:

The result may be a bit unsatisfying. No bouncing? We can improve it a little bit:

But that’s a hack. In general, Verlet integration is not very good for bounces, sadly. Let’s see what it is good at: The other sphere. 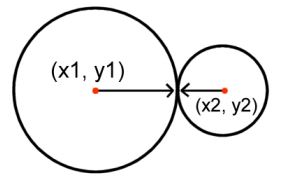 When the circles intersect, we have a number of options.

Option 3 is clearly the most realistic one. But how do we move the balls away from each other? Maths to the rescue again: If the circles intersect, their distance is smaller than their combined radii. The combined radii minus their distance is the penetration depth, and thus the distance they need to be moved apart. Now, if the small ball is ten times lighter than the large one, the small one will do 90% of this distance, and the big one only 10%. Here we go:

Once that is done, the small ball responds surprisingly realistic to the collision.

There is clearly a very large amount of experiments that you could carry out with this code, so today’s assignment is a somewhat random selection.

Let it rain… At some point, you will bring C/C++ to its knees. How to make code like this faster is a topic for another day…