As you noticed in the first article, setting up a project in Visual Studio can be quite a task. And we didn’t (nearly) touch all the settings that you can adjust for a project either. To make your life a bit easier, we will use a project template from now on. This template is simply a directory that contains all the files that you need, with all the settings tuned just right for the kind of programs that we will be building in this series. The template also contains a bit of code that you need for most projects, so that you don’t have to type it yourself. This code aims to take away the platform specific things from you; i.e. it opens a window, lets you draw to it, and updates it for you. Sounds simple, but really it isn’t. Windows operating system can be quite a nightmare to deal with properly, and since that’s just not the core of game development, we felt it’s best to take care of that once and for all. The result is the template.

Get the latest template package:

Extract the package to C:\Projects\template (or whichever folder you used for your project in the first tutorial). Then, open the project by double-clicking the .sln file in the directory.

If you are presented with the security warning shown in the image below, just click the OK button to load the project.

You are receiving this warning because Visual Studio has never seen this project before (it was not created on your computer). The next time you open the same solution file, you will not receive this warning again.

You should see the project in the Solution Explorer now:

) button (F5), you should see a beautiful window with the text “HELLO WORLD” printed in the top-left corner. To emphasise the magnitude of this accomplishment, there is a spinning gun turret drawn on the screen as well. 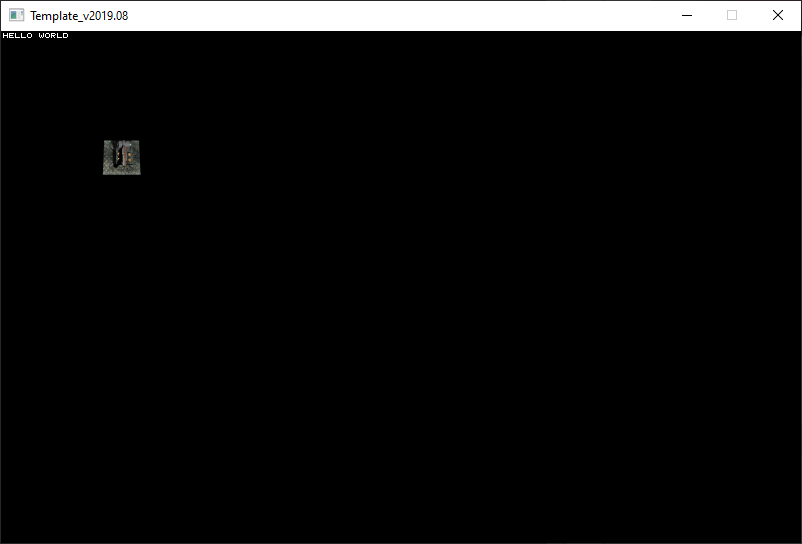 You should see a beautiful window with a spinning gun turret.

The code that you should be interested in right now is in game.cpp. Here are its contents:

This code will be the starting point for all episodes of the Fast track tutorial.

Even though this is just a small program, there’s a lot to say about it. Most (all, actually) of it will be explained in this tutorial series, but for now, let’s limit ourselves to some observations:

There’s quite a bit more, and even more when you explore the other source files, such as template.cpp. Feel free to do so; if you mess anything up, just extract the template from the zip file you downloaded at the beginning of this tutorial.

Let’s try some random things with this program:

An important concept is the screen coordinate system. Every pixel on the screen has a position: the horizontal position is called X, the vertical position is called Y. By default, the template opens a 800 by 512 pixel window, so if you draw something at X = 820; it doesn’t fit, and wraps to the left side of the screen (one pixel lower though!).
And finally, there are numbers: 0xffffff (or capitals: 0xFFFFFF) is a number too. In fact, 0x0000FF equals 255. We will discuss this in more detail at a later time.

You probably noticed that you still have a console window. This seems quite useless now that we can produce proper graphics, but it may come in handy later. We will use it for printing information that is not supposed to be seen by the end user. This will be useful for debugging.

Then, for each straight line:

For bonus points: store the X & Y coordinates in an array and loop through the array to draw the lines.

Once you have completed this assignment, you may continue with the next part.