In this article, I will introduce the different types of memory your CUDA program has access to. I will talk about the pros and cons for using each type of memory and I will also introduce a method to maximize your performance by taking advantage of the different kinds of memory.
I will assume that the reader already knows how to setup a project in Microsoft Visual Studio that takes advantage of the CUDA programming API. If you don’t know how to setup a project in Visual Studio that uses CUDA, I recommend you follow my previous article titled [Introduction to CUDA]

There are several different types of memory that your CUDA application has access to. For each different memory type there are tradeoffs that must be considered when designing the algorithm for your CUDA kernel.

Global memory has a very large address space, but the latency to access this memory type is very high. Shared memory has a very low access latency but the memory address is small compared to Global memory. In order to make proper decisions regarding where to place data and when, you must understand the differences between these memory types and how these decisions will affect the performance of your kernel.

The different types of memory are register, shared, local, global, and constant memory.

On devices with compute capability 1.x, there are 2 locations where memory can possibly reside; cache memory and device memory.

The cache memory is considered “on-chip” and accesses to the cache is very fast. Shared memory and cached constant memory are stored in cache memory with devices that support compute capability 1.x.

On devices that support compute capability 2.x, there is an additional memory bank that is stored with each streaming multiprocessor. This is considered L1-cache and although the address space is relatively small, it’s access latency is very low.

In the following sections I will describe each type and when it is best to use that memory type.

Scalar variables that are declared in the scope of a kernel function and are not decorated with any attribute are stored in register memory by default. Register memory access is very fast, but the number of registers that are available per block is limited.

Arrays that are declared in the kernel function are also stored in register memory but only if access to the array elements are performed using constant indexes (meaning the index that is being used to access an element in the array is not a variable and thus the index can be determined at compile-time). It is currently not possible to perform random access to register variables.

Any variable that can’t fit into the register space allowed for the kernel will spill-over into local memory. Local memory has the same access latency as global memory (that is to say, slow). Accesses to local memory are cached only only GPU’s with compute capability 2.x.

Variables in local memory have the lifetime of the thread. Once the thread is finished executing, the local variable is no longer accessible.

Variables in local memory can be both read and written within the kernel and access to local memory does not need to be synchronized.

Variables that are decorated with the __shared__ attribute are stored in shared memory. Accessing shared memory is very fast (~100 times faster than global memory) although each streaming multiprocessor has a limited amount of shared memory address space.

Shared memory can be both read from and written to within the kernel. Modification of shared memory must be synchronized unless you guarantee that each thread will only access memory that will not be read-from or written-to by other threads in the block. Block synchronization is acheived using the __syncthreads() barrier function inside the kernel function.

Unlike register, local, and shared memory, global memory can be read from and written to using the C-function cudaMemcpy.

Like global memory, constant memory has a lifetime of the application. It can be accessed by all threads of all kernels and the value will not change across kernel invocations unless explicitly modified by the host process.

The following table summarizes the different memory types and the properties of those types.

You can use pointers to memory in a kernel but you must be aware that the pointer type does not determine where the memory is located.

For example, the following code declares a pointer to constant memory and a pointer to global memory. You should be aware that only the pointer variable is constant – not what it points to.

Since you can’t dynamically allocate constant memory, this example would not be very useful anyways.

This version of the matrix multiply algorithm is the easiest to understand however it is also a very naive approach.

The parameters A, B, and C all point to buffers of global memory.

The fist step is to figure out which row (i) and which column (j) we are operating on for this kernel.

On line 10, we loop through all of the elements of row i of matrix A and the column j of matrix B and compute the summed product of corresponding entries (the dot product of row i and column j). A visual aid of this algorithm is shown below. 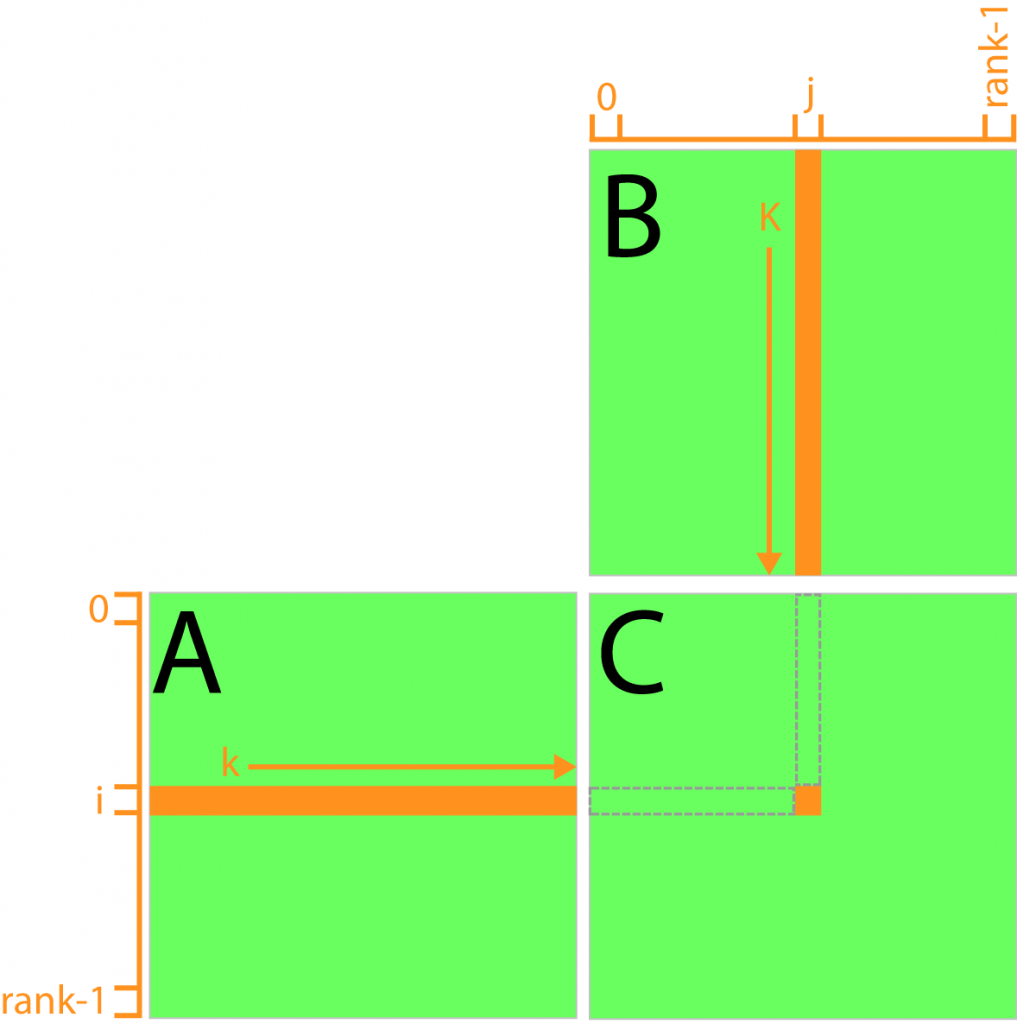 What if we could reduce the number of times the elements of matrix A and B are accessed to just 1? Well, depending on the size of our matrix, we could just store the contents of matrix A and matrix B into shared memory buffers then just compute the resulting matrix C from those buffers instead. This might work with small matrices (remember that shared memory is local to a single block and with compute capability 1.3, we are limited to matrices of about 20 x 20 because we are limited to 512 threads that can be assigned to a single block).

But what if we had larger matrices to multiply? If we can find a way to split the problem into “phases” then we could simply load each “phase” into shared memory, process that “phase”, then load the next “phase” and process that one until we have exhausted the entire domain. 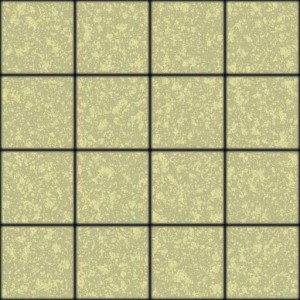 If we split our grid into blocks of 16 x 16 threads (which I showed in a previous article about the CUDA execution model to be a good granularity for this problem) then we can create two buffers in shared memory that are the same size as a single block in our kernel grid, one that holds a “tile” of matrix A, and other to store a “tile” of matrix B. 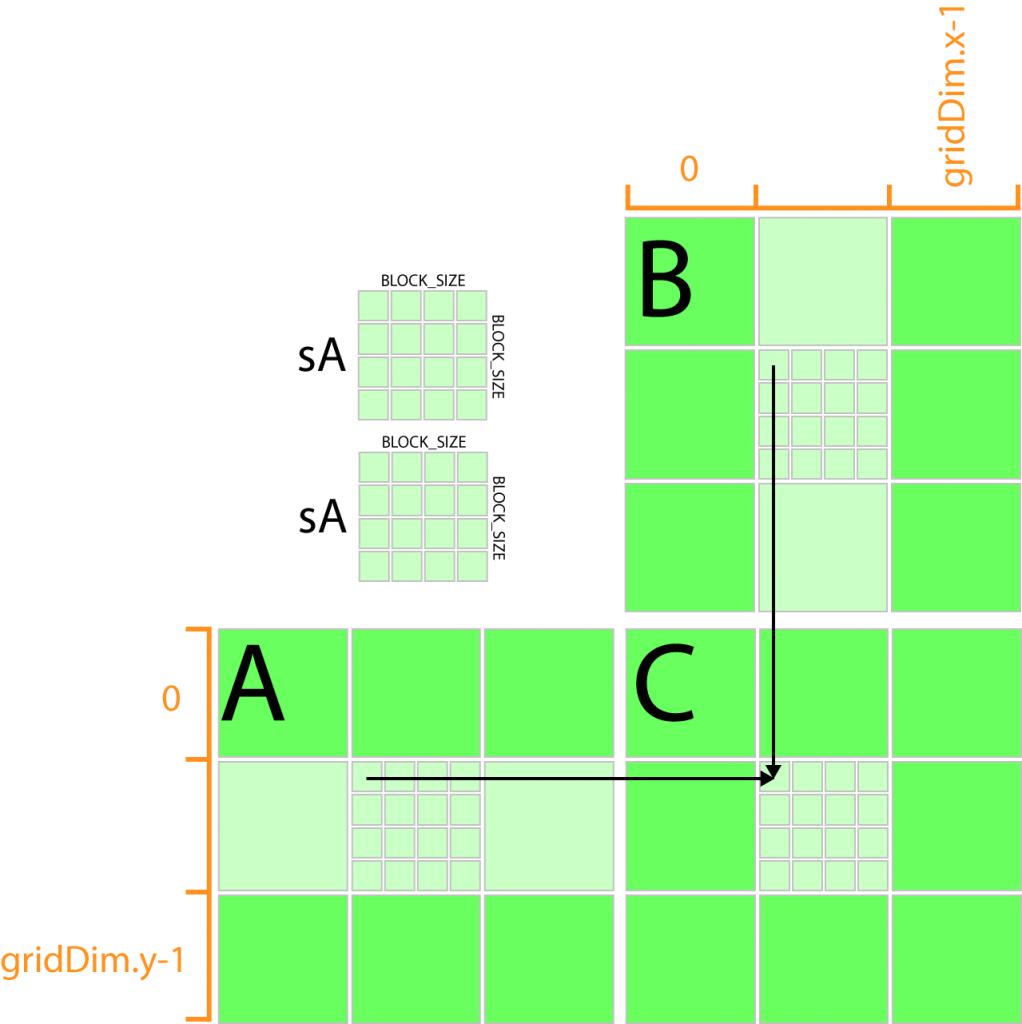 And we need 2 buffers, so we will need 2,048 Bytes of shared memory per block. If you remember from the previous article about the CUDA thread execution model,
thread blocks of size 16 x 16 will allow 4 resident blocks to be scheduled per streaming multiprocessor. So 4 blocks each requiring 2,048 Bytes gives a total requirement of 8,192 KB of shared memory which is 50% of the available shared memory per streaming multiprocessor. So this this tiling strategy will work.

So let’s see how we might implement this in the kernel.

On line 5-8, we just store some “shorthand” versions of the thread and block indexes into private thread variables (these are stored in registers).

On line 11, and 12 the two shared memory buffers are declared to store enough values that each thread in the thread block can store a single entry in the arrays.

On line 20, the 1-D index into the result matrix C is computed and the sum of the products is stored in the float variable sum.

On line 25, we will loop over the “tiles” (called phases here) of matrix A and matrix B. You should note that this algorithm assumes the size of the matrix is evenly divisible by the size of the thread block.

Before we can access the data in the shared memory blocks, we must ensure that all threads in the entire block have had a chance to write their data. To do that we need to synchronize the execution of all the threads in the block by calling the __syncthreads() method.

Then the for loop on line 32 will loop through the elements of shared memory and sum the products.

Before we leave this loop and start filling the next “tile” into shared memory, we must ensure that all threads are finished with the shared memory buffers. To do that, we must execute __syncthreads() again on line 36.

This will repeat until all phases (or tiles) of the matrix have been processed.

Once all phases are complete, then the value stored in sum will contain the final result and it is written to the destination matrix C.

Resources as a Limiting Constraint

This of course is not ideal, but it is conceivable to imagine that a single block might have this requirement. In most cases the GPU will still out-perform the CPU if the benefit of using the low-latency memory is fully realized.

Q. If we want to execute a 32 x 32 kernel grid consisting of 16 x 16 thread blocks on a GPU, then what is the maximum amount of shared memory that we can allocate in a kernel function and still achieve 100% thread occupancy on the streaming multiprocessor for devices that support compute capability:

A. To properly answer this question, we must first know something about the limitations of the streaming multiprocessor.

We know from the previous article on the CUDA execution model, a warp consist of 32 threads. For devices of compute capability 1.3, the maximum number of resident warps is 32. This means that the SM can have a maximum of 1024 threads resident at any given time. With thread blocks consisting of 256 threads, we can have 1024/256 = 4 thread blocks resident per SM. We also know (from the compute capability table shown above) that for devices with compute capability 1.3, each SM has 16 KB (16,384 Bytes) of shared memory. In order to accommodate all 4 blocks, we cannot allocate more than 16 / 4 = 4 KB (4,096 Bytes) of shared memory per block if we want to achieve 100% occupancy.

For devices of compute capability 2.0:

Q. Given the same case as the previous question, what is the maximum number of 32-bit registers that can declared per thread while still maintaining 100% thread occupancy?

In this article, I discussed the different types of memory that is available on the CUDA GPU and I discussed the limitations and benefits of each type of memory. I also showed an example of using shared memory to optimize the performance of the matrix multiply kernel.

When creating a kernel function, the developer should always be aware of the resource limitations of the GPU and the effect that it will have on the ability for the block scheduler to fully occupy the streaming multiprocessor.

You can download the CUDA example below. This file contains a solution file for Visual Studio 2008 (v9). You must have the CUDA Toolkit installed to build from source. Pre-built executables are also provided in the bin folder for each project.