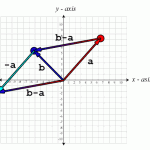 In this article I would like to discuss operations on vectors.  This article assumes the reader has a basic knowledge of what vectors are and how they are represented. My goal here is simply to refresh your memory about what kind of operations can be performed on vectors specifically operations that are important if you are trying to create a 3D game engine.

Throughout this article, I will use a convention when referring to vectors, scalars, and matrices.

To negate a vector, we simply negate ervery component of the vector.  Negating a vector, results in a vector of the same magnitude, but opposite in direction.

A few examples of vector negation are:

Some example of vector addition and subtraction are:

Personally, I have trouble remembering what order I have to subtract vectors in order to get the vector in the correct direction.  I use the following mnemonic to help me remember:

The following images show examples of adding and subtracting vectors: 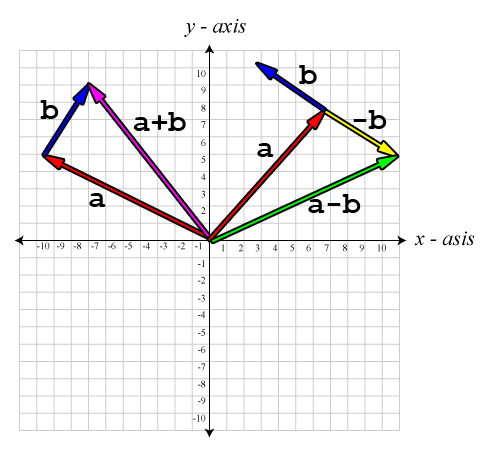 Vector Multiplication by a Scalar

Vectors can also be multiplied by a scalar.  Scalar division is also supported, but this is equivalent to multiplying the vector by the reciprocal of the scalar.

Vector multiplication by a scalar is show below:

Magnitude of a Vector

The magnitude of a vector, also called the length, or the norm of the vector is a scalar and is represented using the double vertical bars on either side of the vector variable (\(\|\mathbf{v}\|\)), not to be mistaken as the notation used to denote the absolute value of a scalar.  The length of a vector is calculated using the following general algebraic rule:

An example of calculating the length of a vector is shown below:

It is sometimes useful to express vectors only by their direction and not by their length.  This is necessary for example when we want to find out if another object, or point is in front of or behind our reference frame, or when we need to calculate a reflection vector that would occur from a surface with a “upward facing plane”.  Vectors of unit length are also called normals.

The normal of a vector can be calculated using the following equation:

In words, the normalized vector is the vector divided by the magnitude of itself.  This results in a vector of unit length.

Recall from the “Vector Addition and Subtraction” section that I stated the mnemonic “the vector from ‘a’ to ‘b’ is ‘b’ minus ‘a'”?  Well this is where this comes in handy.  When we want to know the vector that goes from one point to another, we visualize the two points \(\mathbf{a}\) and \(\mathbf{b}\) as vectors from the origin and when we subtract them, the result is another vector which doesn’t necessarily describe a point in space, but rather a direction from one point to the other.

The images below shows an example of using vector subtraction to calculate a vector from one point in space to the other: 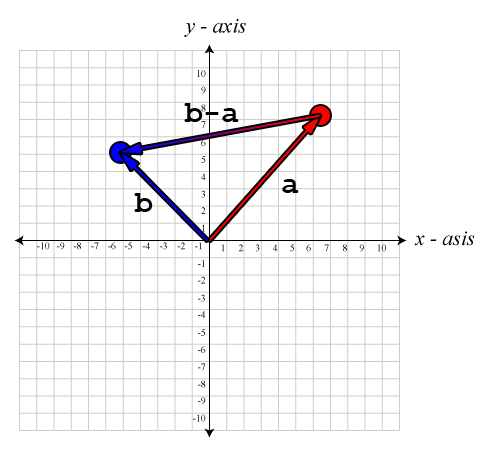 The distance between two points (1) 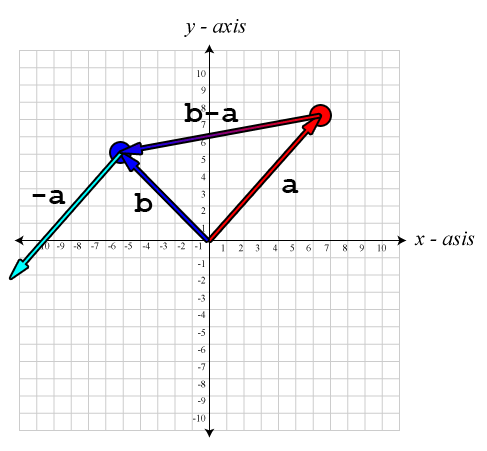 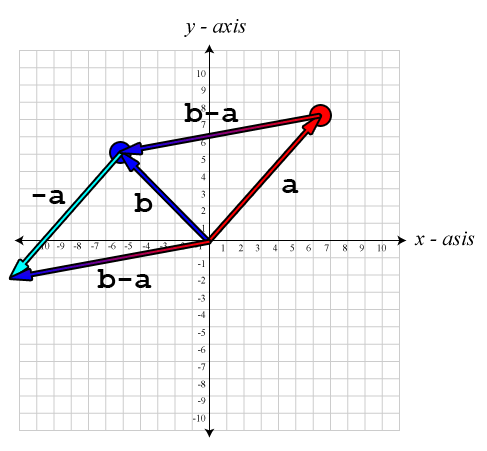 The resulting vector is a vector from the origin to the head of vector \(-\mathbf{a}\).

To get the distance between these two points, we simply calculate the magnitude of the resulting vector \((\mathbf{b}-\mathbf{a})\).

Notice that if the only thing we need to calculate is the distance between the two points, it doesn’t matter if we calculate \(\|\mathbf{b}-\mathbf{a}\|\) or \(\|\mathbf{a}-\mathbf{b}\|\), the result will be the same.

The general form for the dot product rule is:

An example of calculating the dot product of two vectors:

You may have noticed that if you calculate the dot product of a vector on itself give the squared distance of the vector.

The dot product of two vectors is equal to the magnitude of the vectors multiplied by the cosine of the angle between them.

We can solve for \(\theta\) if we rearrange the equation:

We can further simplify the equation if we assume that both \(\mathbf{a}\) and \(\mathbf{b}\) are of unit-length (that is to say that the vectors are normalized). In such a case, the denominator becomes 1:

If we are only interested in the position of an object relative to another, we only need to calculate the dot product.  The following table shows the result of the dot product under specific conditions:

The image below shows this graphically: 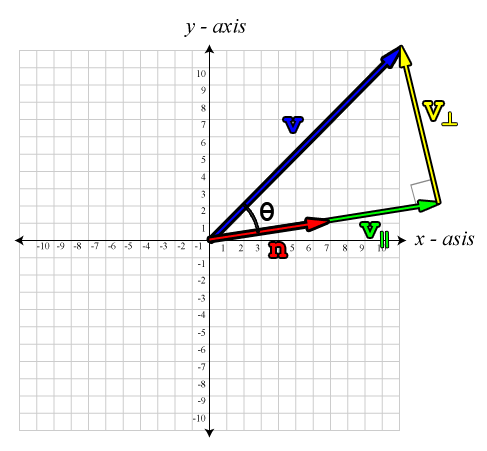 Using what we know about the dot product show in the previous example, we can solve for \(\mathbf{v}_\parallel\):

I think you will recognize the first part of the equation, \(\frac{\mathbf{n}}{\|\mathbf{n}\|}\). This is simply the vector normalization formula.  The next part of the formula might be a bit confusing, \(\|\mathbf{v}_\parallel\|\). You’re probably thinking “how can we know the length of the vector that we are trying to calculate?”.  Well, this is easy if we remember back from our trigonometry class the simple trigonometric ratio for right-angle triangles:

Re-writing our equation, we get:

So now we can express \(\|\mathbf{v}_\parallel\|\) in terms of things we know.  Substituting the left side of the previous equation back into our original formula gives:

We can re-write the equation and multiply both the numerator and denominator by \(\|\mathbf{n}\|\) to get:

Be careful to only use this form of the equation when we know that \(\mathbf{n}\) is of unit length.

Subtracting \(\mathbf{v}_\parallel\) from both sides gives:

And substituting \(\mathbf{v}_\parallel\) for the previous equation: 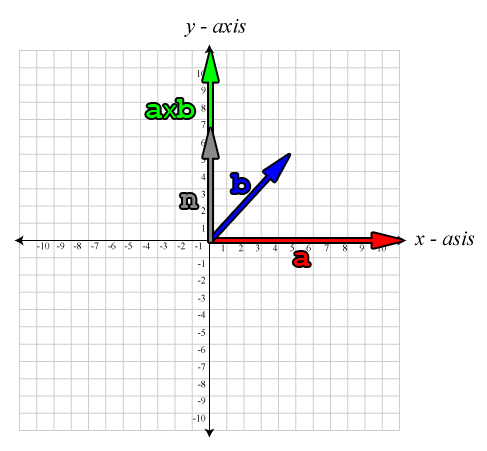 The equation for the cross product is given by:

The cross product is also not associative:

It is also true that the magnitude of the cross product is the positive area of the parallelogram (\(A\)) formed by the edges of the two vectors.

This is shown in the image below: 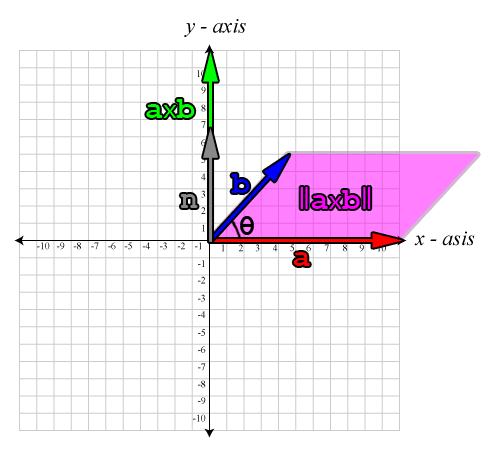 The magnitude of the cross product is equivalent to the area of the parallelogram formed by the original vectors.

If we say the vectors \(\left(\mathbf{i},\mathbf{j},\mathbf{k}\right)\) are the vectors that form the orthogonal basis for our coordinate space, then the cross product satisfies the following identities:

And if we swap the order of the vectors for the cross product, the result will be negated: 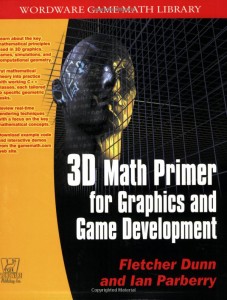