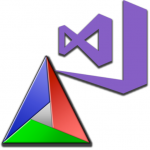 CMake is an open-source, cross-platform suite of tools that provide the ability to build, test, and package software. CMake encourages and facilitates the development of open-source, and cross-platform software because the CMake definition language is not designed for a particular platform or operating system. The CMake definition language is also not primarily concerned with the development environment (i.e. Visual Studio) that is be used by the software engineer. This makes developing cross-platform software easier.

There are several advantages to using CMake with your own software projects. In recent years there has been a lot of adoption of distributed source control systems such as Git in the open-source development community. Many of these open-source projects are using CMake to define the project configuration. Integrating these open-source projects in your own software becomes easier if you are already familiar with CMake. Another advantage of using CMake is that other open-source developers will be more inclined to work with your project if they are not required to use a particular development environment tool.

The only disadvantage of using CMake is that the generated solution and project files should not be distributed with your source code. This requires that anyone consuming your project must also use CMake to integrate your libraries into their projects.

You will not be required to learn CMake in-depth to follow this lesson. Anything you will need to know to work with CMake will be described step-by-step.

In order to follow this tutorial, you will only need to have the Visual Studio 2017 development environment installed on your computer. Visual Studio comes with the CMake build tool pre-installed (if this is selected during the installation phase). If you do not have Visual Studio installed then head over to https://www.visualstudio.com/downloads/ and download the Visual Studio Community. This version is free for open-source developers. 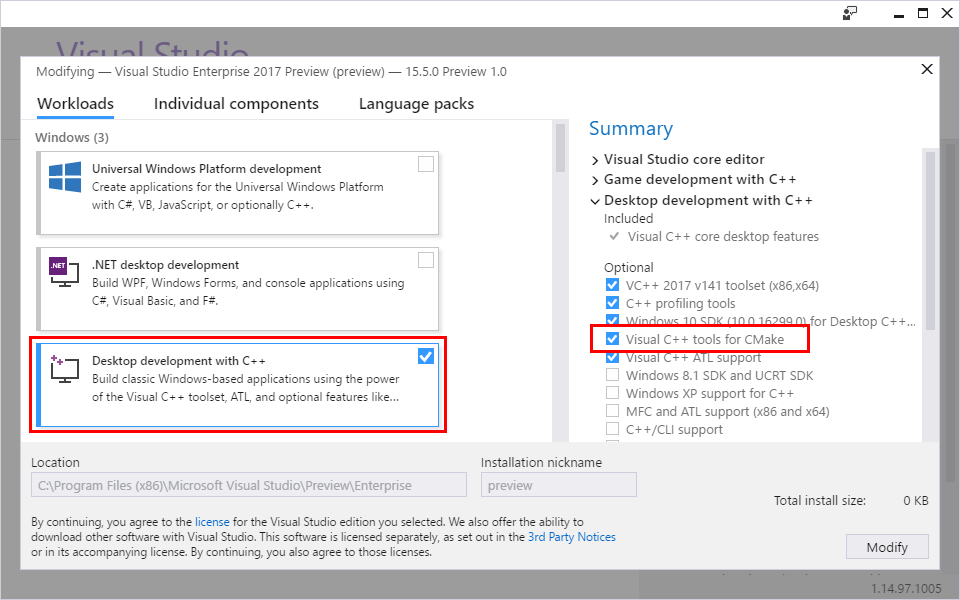 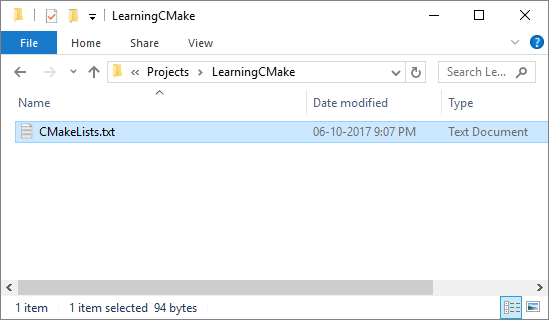 If you right-click on empty space in the new folder in Windows Explorer, you should see the context aware pop-up menu with the option to Open in Visual Studio. 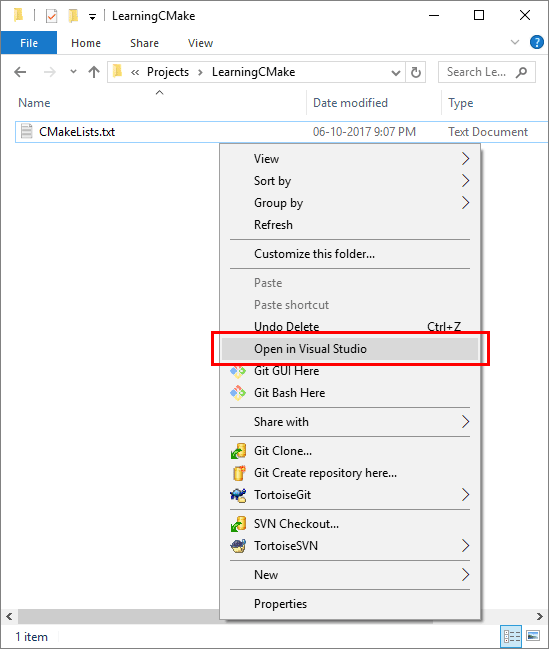 Selecting the Open in Visual Studio from the pop-up menu should cause Visual Studio to be launched and the selected folder is set to the current workspace root. Alternatively, you can start Visual Studio and select File > Open Folder (Ctrl+Shift+Alt+O) from the main menu and select the new folder you just created. 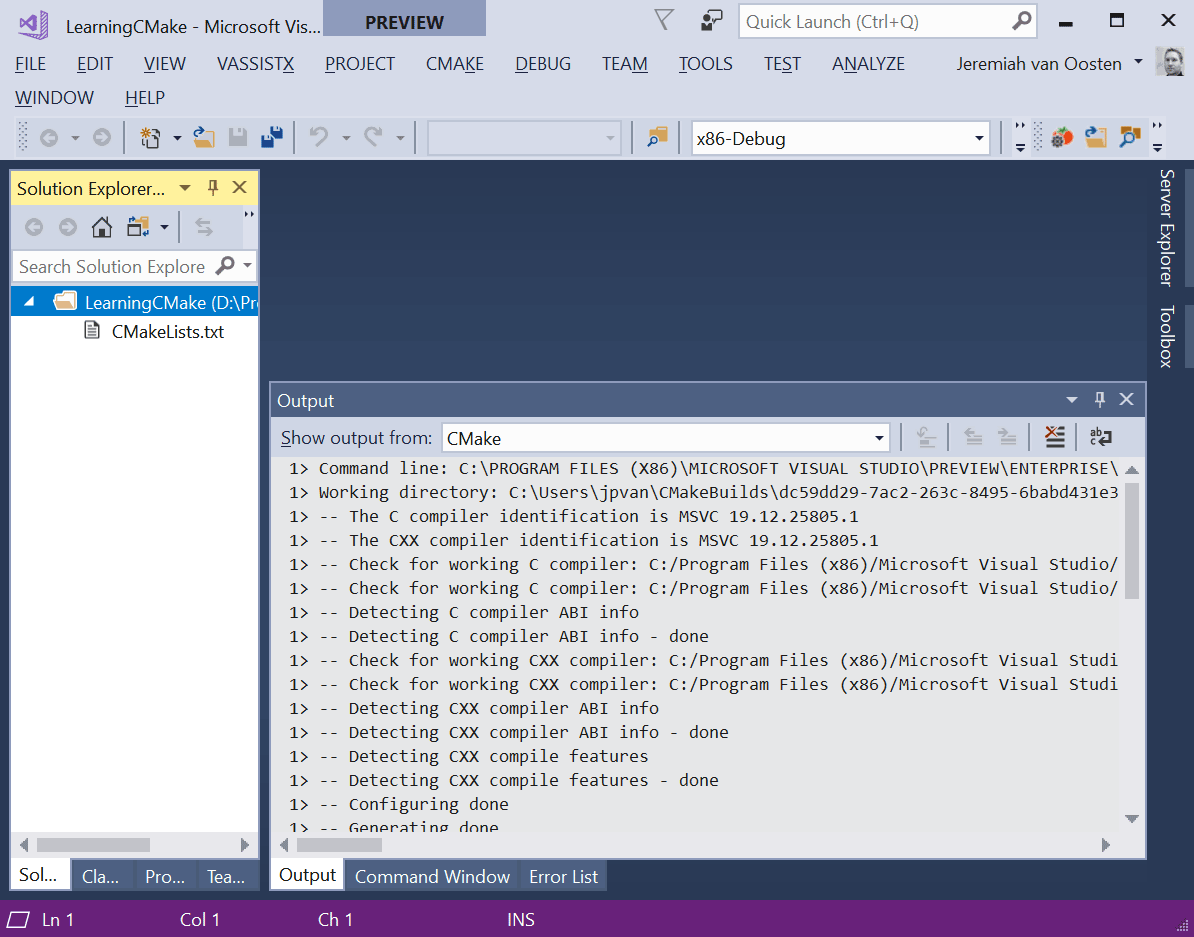 Visual Studio should recognize the folder as a CMake project and start parsing the CMakeLists.txt file.

Open the CMakeLists.txt file by double-clicking on it the Solution Explorer and add the following: 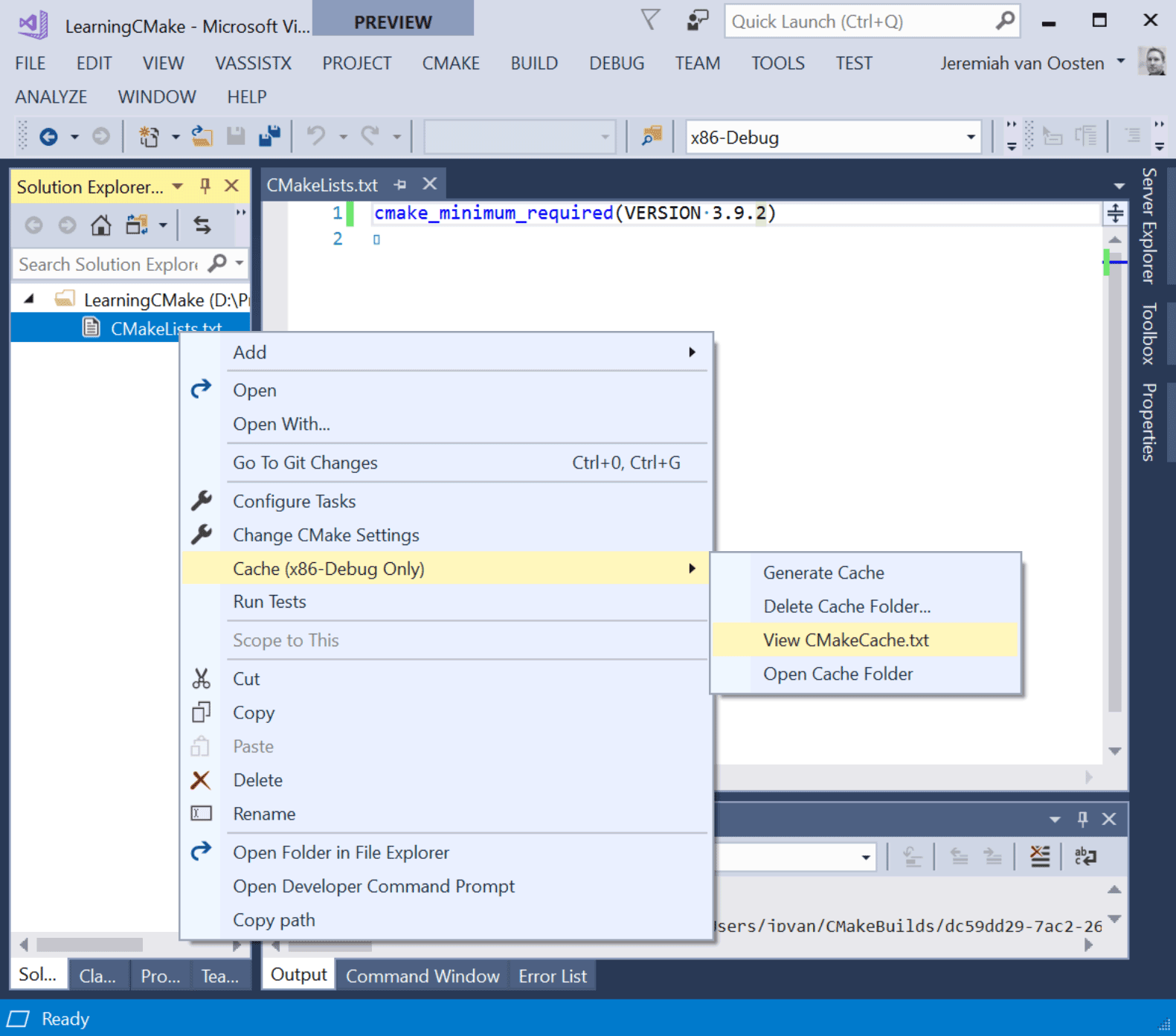 You can also force Visual Studio to regenerate the CMakeCache.txt file at any time by selecting Generate Cache from the pop-up menu shown in the previous image. This is useful if you make changes to the CMakeLists.txt file in an external program and Visual Studio did not detect that the file was modified.

Add a new source file to the solution by selecting File > New > File… (Ctrl+N) from the main menu in Visual Studio or right-click in the Solution Explorer and select Add > New File from the pop-up menu. 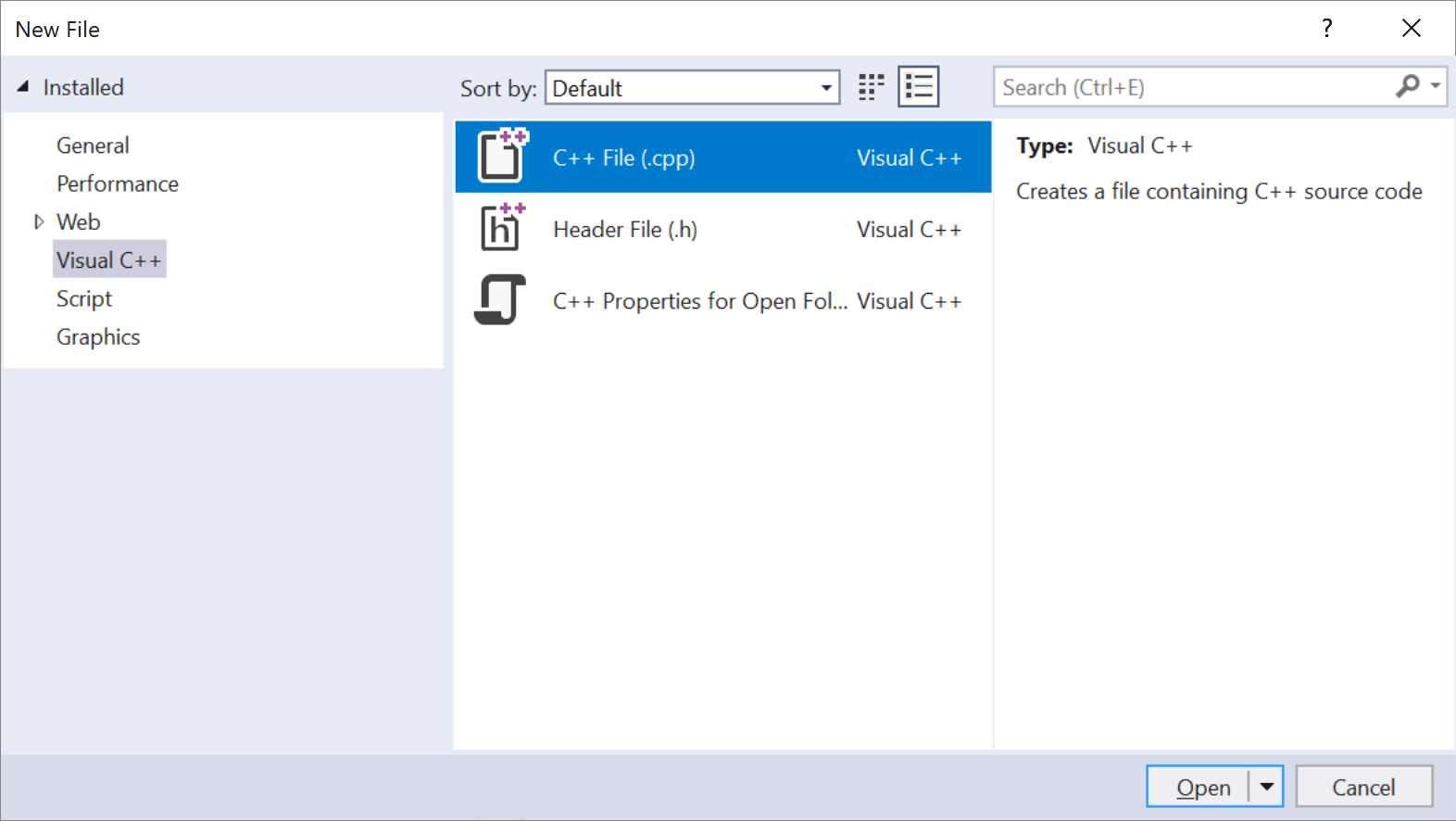 Create a new C++ source file in the root folder of the workspace (the same folder that contains the CMakeLists.txt file) and save the file with the name main.cpp.

Copy-paste the following code into the main.cpp file.

Although this is a valid C++ program with the correct entry-point and return statements, Visual Studio does not allow you to debug this program yet. This is because an executable target has not yet been defined in the CMakeLists.txt file. So let’s do that first.

Open the CMakeLists.txt file in the workspace root and copy-paste the following text. 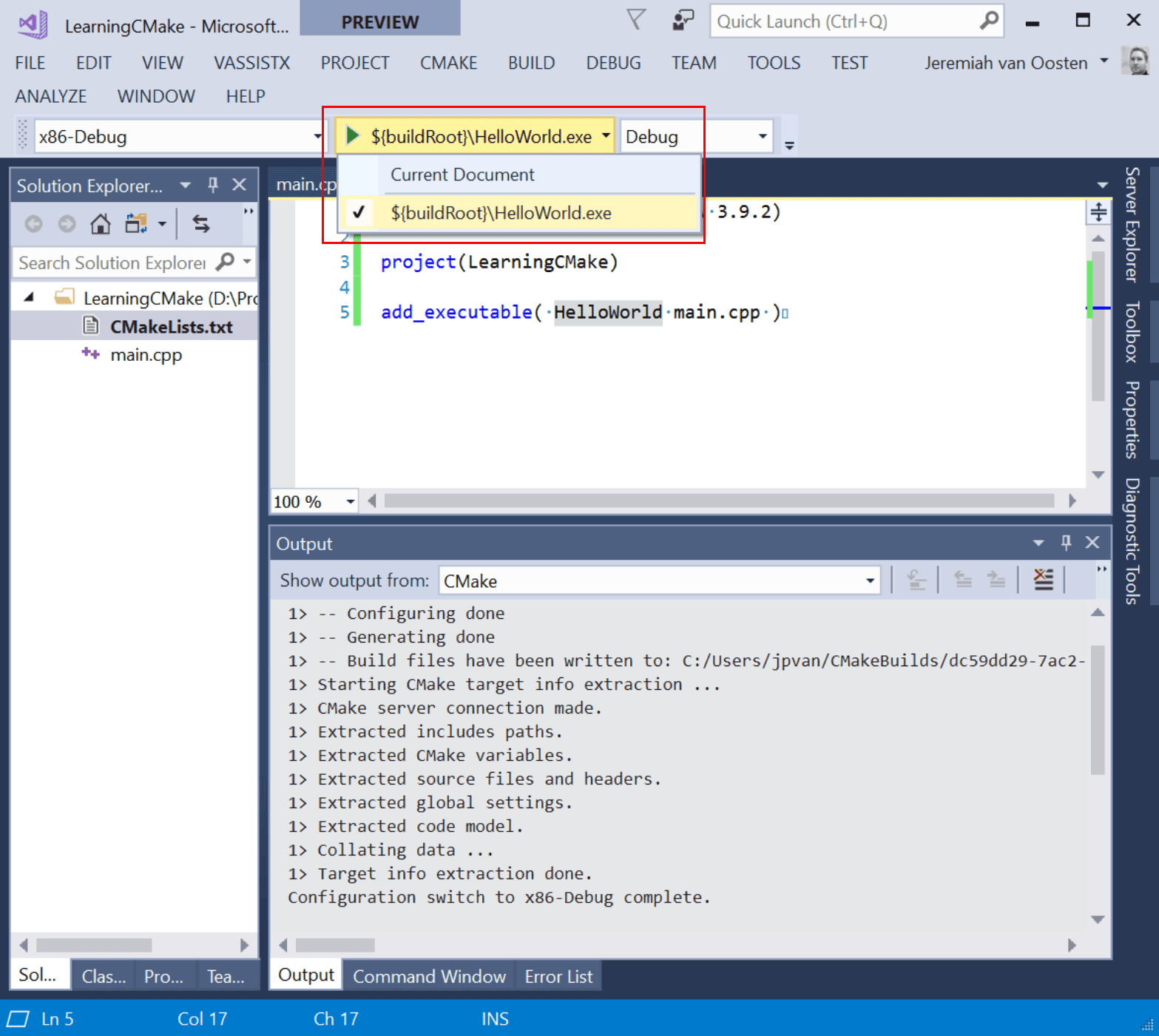 After you have selected the HelloWorld.exe target, you can use the Debug > Start (F5) command from the main menu to debug the application. You can also just click the Startup Item in the toolbar to start the debugger.

You should see the console window appear with the text “Hello World!” being displayed in the console.

All of the debugging features should work even without creating a Visual Studio project files and solution file.

Place a breakpoint (F9) on line 5 of the main.cpp source file and start the debugger again. 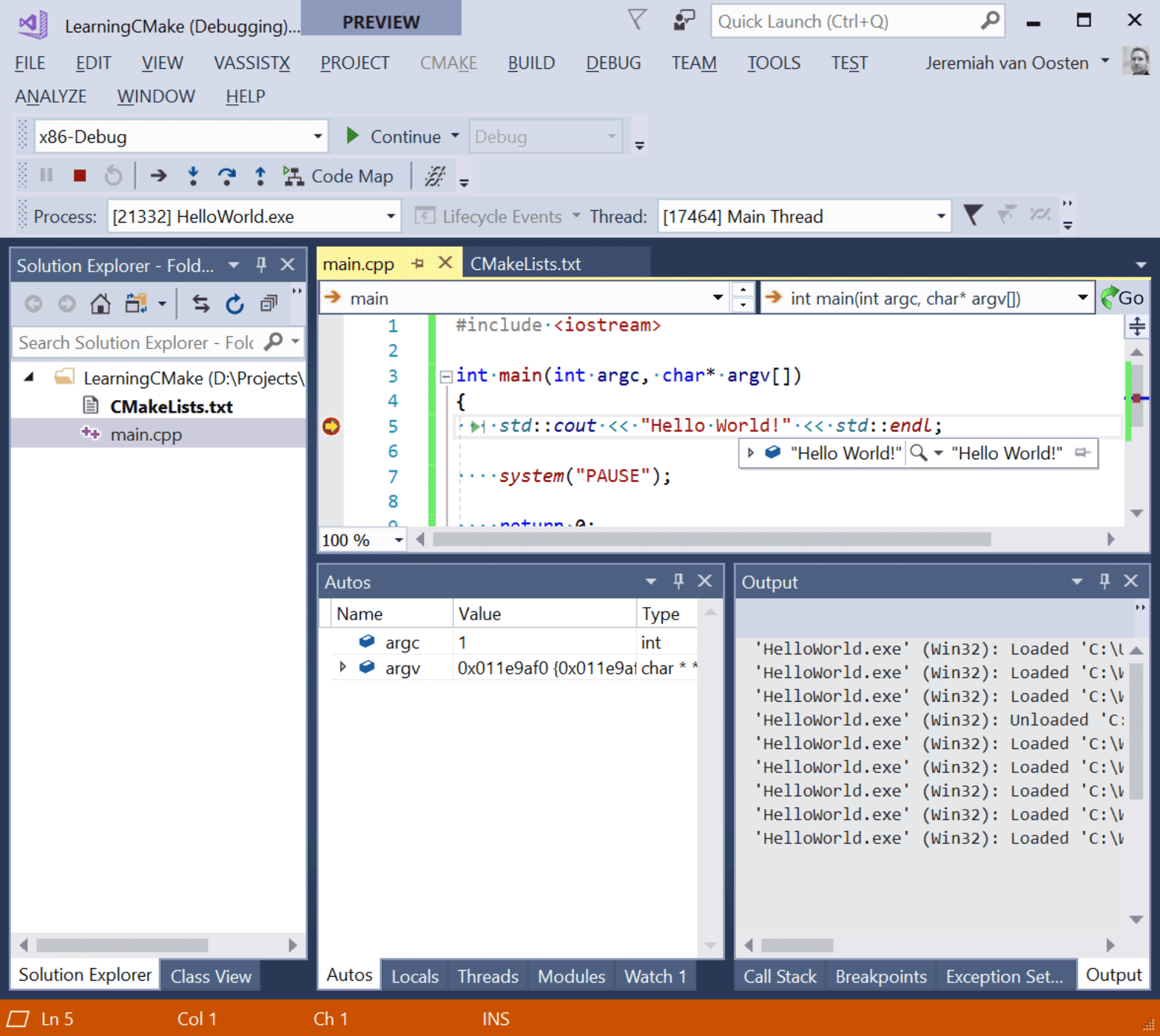 You’ll notice that the program stopped on line 5 of the HelloWorld application. All of the debug commands you are accustomed to are still working. You can Step Over (F10), Step Into (F11), Step Out (Shift+F11), or Continue (F5), and Stop Debugging (Shift+F5). Inspecting variables are working and the Call Stack is traversable using the Call Stack window. 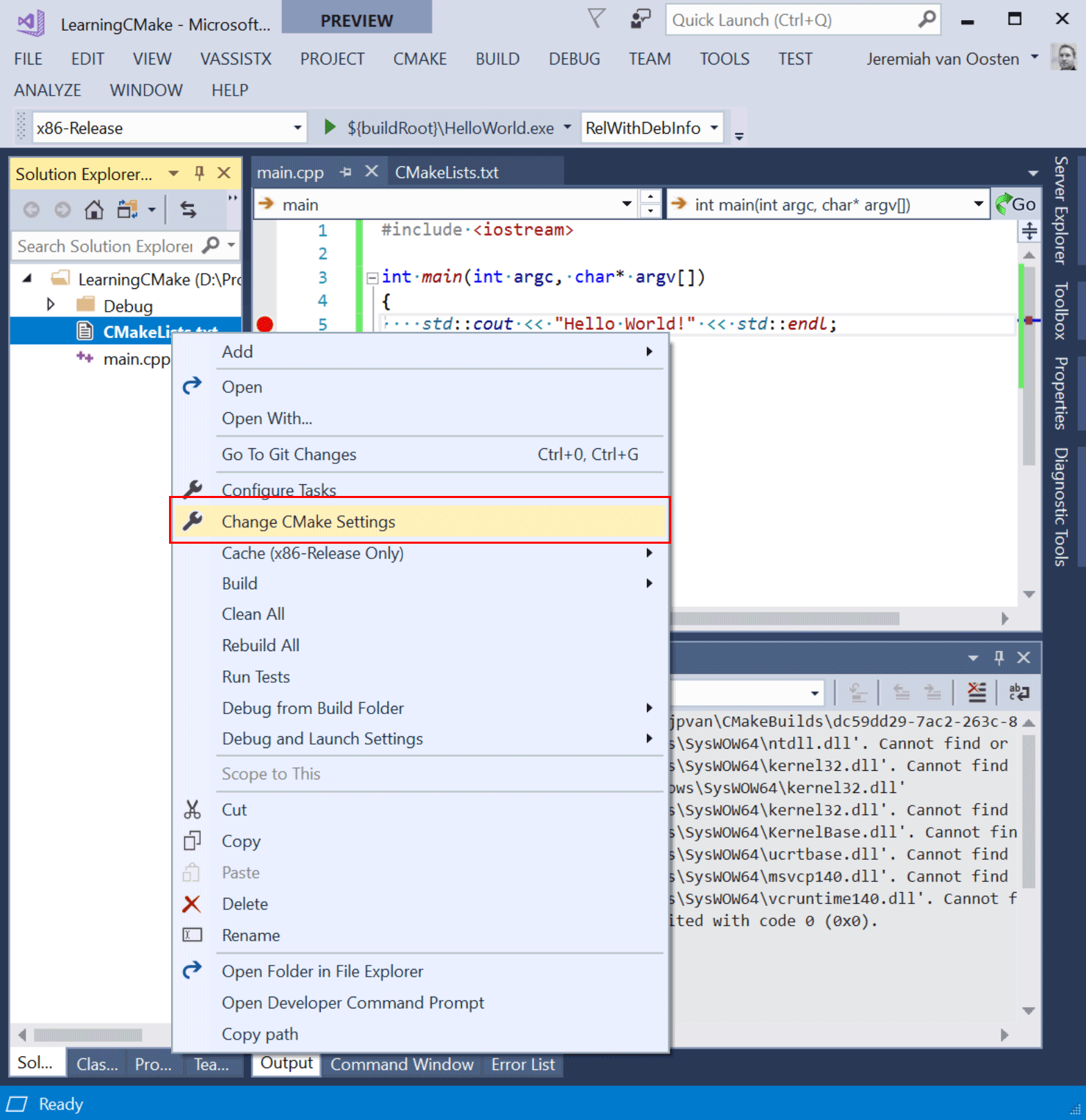 A new file called CMakeSettings.json will be added to the root of the workspace and the file will be opened in the editor.

Visual Studio may not remove the x86 configurations from the Project Settings drop-down box on the toolbar until you restart the IDE.

Add the following code snippet to the top of the CMakeSettings.json file (inside the first brace ({) but above the “configurations” block.

This defines an environment variable in global scope called NINJA_STATUS which is used to specify the progress status message that is printed on the command-line before a Ninja build rule is executed. In this case, the status message will print the number of finished rules (%f), the total number of rules that need to run to complete the build (%t), and the elapsed time in seconds (%e). For more information regarding the placeholders that can be specified to control the progress status message, refer to the Ninja manual.

When you build the application using the x64-Release configuration, the Ninja progress status should be displayed with the word Release in the message.

Several variables can be used within the CMakeSettings.json file.

Using these variables, the configuration settings can be simplified.

In this case, the build root and the install root folders are specified in the global environments scope and can be used in each of the different configuration blocks allowing the folder path to be defined once but it will expand to the full path according to the properties of the specific configuration and thus reducing code duplication.

By default, Visual Studio exposes every executable target defined in the CMakeSettings.txt file in the Startup Item drop-down menu on the main toolbar. 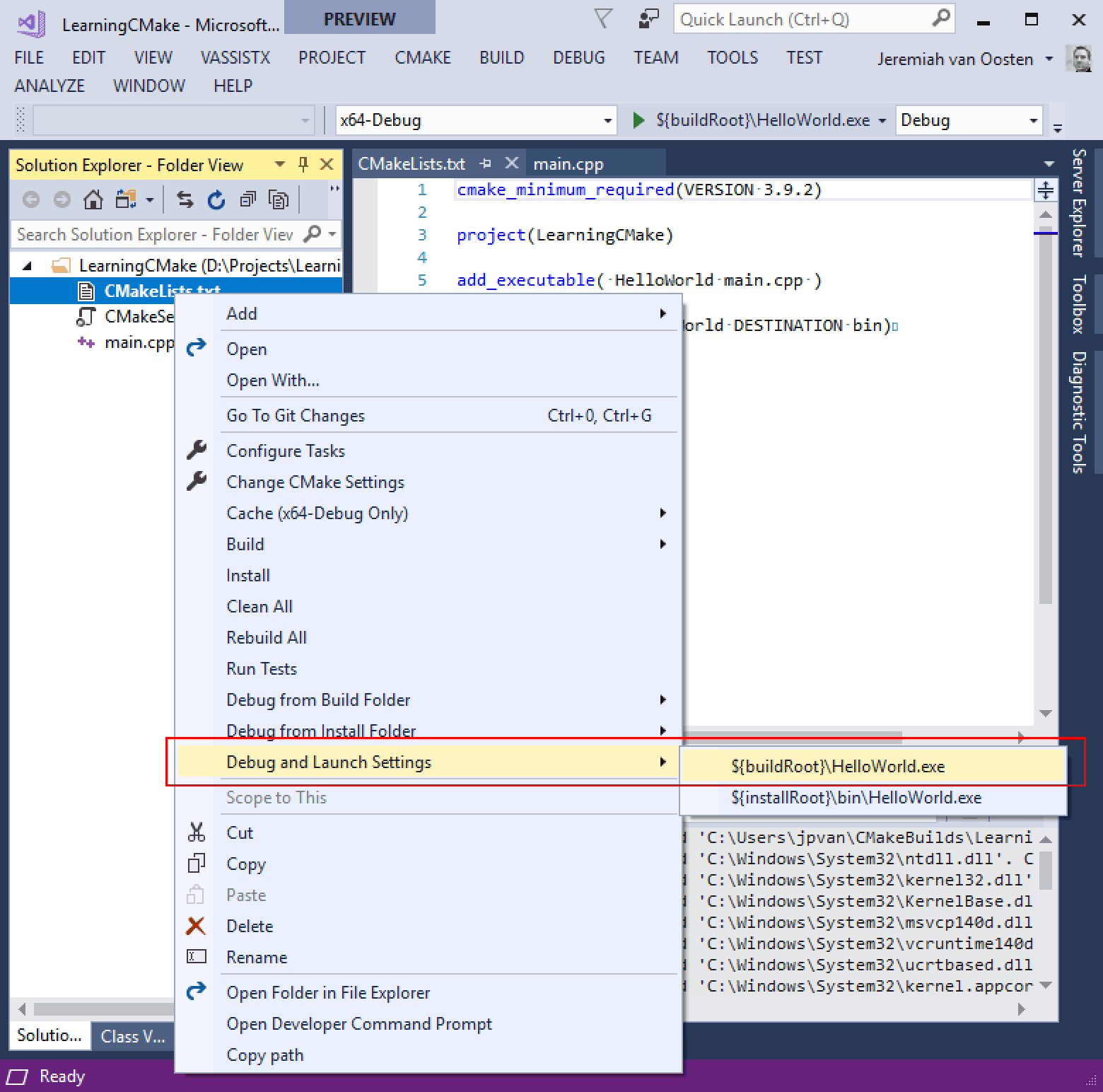 The launch.vs.json file should open in the editor.

If the application requires arguments to be specified on the command-line during debugging, these arguments can be specified using the args array in the launch configuration.

Edit the launch.vs.json file and specify the following launch configurations:

The highlighted text on lines 12-19 show an additional launch configuration that specify both the command-line arguments and the current working directory during debugging.

Edit the main.cpp file and copy-paste the following code:

The highlighted lines have been added to the main.cpp file.

Make sure the current Startup Item is set to HelloWorld with Args and run the application. You should see the following output displayed in the console.

As can be seen in the output, the current working directory matches that specified in the launch configuration and all of the arguments specified in the args array have been printed to the console.

In this article, I described the CMake integration that has been introduced in Visual Studio 2017. I showed you how to specify the various build configurations and how to modify the launch configurations to control how the application is debugged.

This article is not intended to be an in-depth explanation on using CMake but just a brief introduction to using CMake with Visual Studio 2017. Since the CMake integration tools are still being developed by Microsoft, you can expect that the tools will change. Perhaps GUI tools will be added to Visual Studio that allow the user to specify the build configurations and specify the CMake options that you may already be familiar with when using the CMake-GUI tool.